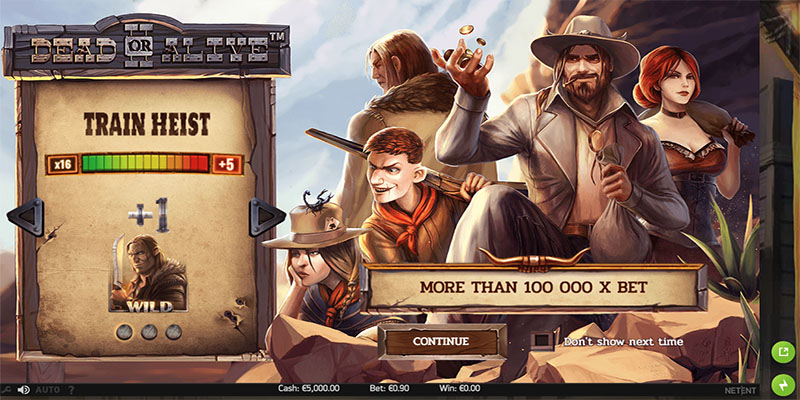 As one of the leaders in the casino games’ development industry, NetEnt has created many slots that have created quite a buzz with the players. However, very few games have been as popular as their original Dead or Alive. So, it came as no surprise when the company decided to create and launch a sequel and Dead or Alive 2 slot machine has been just as popular, if not more, as its predecessor.

The new slot features the same theme as the original. The game takes the player back in time to the famous Wild West period of fast gunmen, brave sheriffs, and dusty saloons equipped with wooden chairs and tables and decent whiskey.

Transparent reels of Dead or Alive 2 slot machine are set on a backdrop of a typical Wild West town. Just like the original, the game features just 9 paylines but that doesn’t hurt its ability to produce some truly amazing payouts. Background sounds add to the atmosphere, as you’ll hear wind blowing, guns firing, and the bell from the local church occasionally coming to life.

Symbols on the reels are just what you’d expect them to be. Three robbers armed to their teeth act as wild symbols and are also the highest paying symbols in the game, as the full line will pay 1,500 coins. This is followed by the sheriff’s badge, which pays 1,000 coins for the full line, a gun, a cowboy hat, boots, and a whiskey bottle.

Of course, there are also scatters, represented by two crossed guns. Landing three or more of these anywhere on the reels triggers the bonus feature. However, if you manage to land one scatter on each of the reels, you’ll also score the biggest possible win in the base game of 2,500 coins.

Where Dead or Alive 2 slot machine differs most from its predecessor is the bonus feature. In the original game, players only had one bonus. In this one, however, you’ll have an opportunity to choose from three different options every time three or more scatters make an appearance.

These three features are quite different and the difference isn’t just cosmetic one.

The first feature is called Train Heist Free Spins. If you pick this option, the win multiplier will increase with every wild you land during the bonus and you’ll also win an additional free spin every time a wild symbol lands. If you reach the 16x multiplier, you’ll be awarded additional five free spins. While it is quite possible to win big in the Train Heist bonus, this is the least volatile of the three options.

The next is the Old Saloon bonus and it’s basically the same one found in the original DOA slot. All wilds become sticky and if you manage to land one of them on each reel, you’ll be awarded additional five spins. All wins are doubled including the wild-line wins, so if you manage to get those five wilds in the right positions with few spins remaining, the potential is huge.

Finally, there is the third option called High Noon Free Spins. All wilds become sticky, just like in Old Saloon, but if you manage to land two on the same reel, they’ll also get a 2x multiplier. Land all three, and the multiplier goes to 3x. If you manage to get at least one wild on each of the reels, you’ll also get extra five spins. Clearly, this is the bonus feature with the biggest winning potential, but also the most volatile one as it will often produce very small wins to make up for those times the slot goes crazy and pays an obscene amount.

All in all, NetEnt has done a great job with their Dead or Alive 2 slot machine. They took a game that was already great and made it even better. Giving players more options to choose their preferred bonus is definitely a welcome option and the one that will make the game appealing to those who aren’t that crazy about super-volatile game. At the same time, they stayed true to the original in many aspects and only gave it a nice visual overhaul, making it a great successor to one of the most popular slots we’ve seen in the recent years.